This six-week course will develop your creative writing skills and provide you with inspiration to bring an idea for theatre to life. The course will focus on sparking ideas and creating theatre through text, with an active approach to creative writing that will bring writers away from their desks. 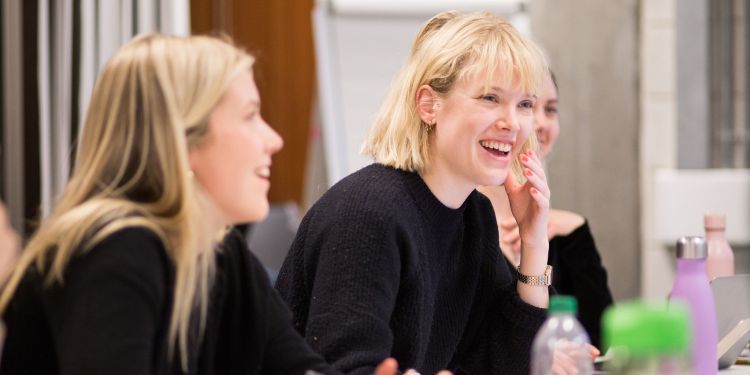 About Creative Writing for Live Performance

This six-week course will develop your creative writing skills and provide you with inspiration to bring an idea for theatre to life. The course will focus on sparking ideas and creating theatre through text, with an active approach to creative writing that will bring writers away from their desks.

Anyone who has an idea for a story and wants to bring it to life, or anyone who wants to write for performance but doesn’t know where to start.

You can expect to:

There will be optional tasks for you to complete between each session, with the aim of having a completed piece of writing by the end of the course. You will have the opportunity to hear your writing performed by actors.

"It will challenge you to start making the thing you've been thinking about, to take yourself seriously and free yourself to be playful and inspired - do it!"

The course has been developed by award-winning writers and performers Maddie Rice and Tom Machell. The course will be led by Tom Machell.

As a writer she is currently developing television projects with Apple TV, NBC Universal, AMC, Mammoth Screen, HatTrick, Rocliffe and STV and her first pilot HANDY was aired on RTE in April 2019.

Maddie is currently under commission to write a new play for SOHO Theatre and Drywrite as one of the SOHO SIX.

Her debut play Pickle Jar won the 'Three Weeks Editors award' in Edinburgh, transferred to SOHO Theatre and is now being developed for television with NBC Universal.

As an actress Maddie most recently won critical acclaim starring in the smash-hit Fleabag UK and Australian tour. She writes and performs with comedy groups zazU and Lead Pencil.

Ticker, Tom's debut play, was published by Play Dead Press and completed a run at the Underbelly, Edinburgh Fringe in 2019 to critical acclaim. Tom's latest play Second The Best has just finished its initial ACE supported R&D and will run in 2021.

Tom recently wrote and starred in his first comedy short for Channel 4 Junior Doctors Padz. He is currently writing his first children's TV series Elliot's Guide To Everything in partnership with the BFI and is adapting Ticker into a television series which he will write and star in.

As an actor Tom made his Off-Broadway debut with Carol Tambor award winning play Life According to Saki, is a series regular on Comedy Central's viral sketch show Every Blank Ever and has appeared in a number of TV, feature films and shorts as well as off West End and regional theatre productions.

Tom is part of award winning comedy troupe zazU who have four successful Edinburgh Fringe runs, transferring all shows to sell-out runs at the Soho Theatre. They are currently developing their work for radio and television.

Reading Theatre: A Play a Week