Founded in 1880, we were the first municipal music college in Great Britain. Today, we have over 1000 students studying with us on our London campus. 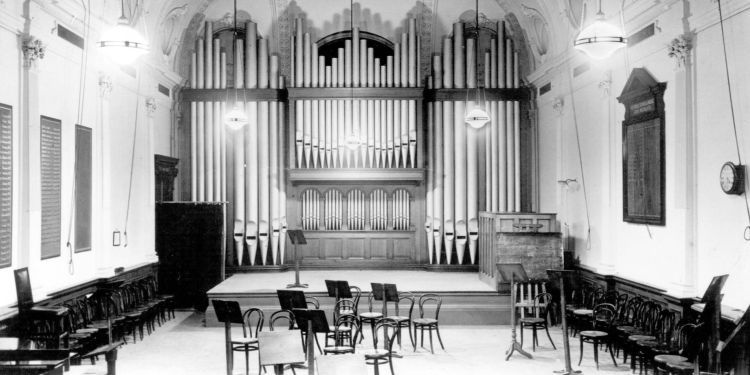 Guildhall School of Music first opened its doors on 27 September 1880, housed in a disused warehouse in the City. With 62 part-time students, it was the first municipal music college in Great Britain. The School quickly outgrew its first home, however, and in 1887 it moved to new premises in John Carpenter Street in a complex of educational buildings built by the Corporation of London to house it and the City's two public schools.

The new building was completed by 9 December 1886 and the then Lord Mayor of London, Sir Reginald Hanson attended the opening ceremony. Teaching continued under the first Principal of the School, Thomas Henry Weist Hill, and his team of 90 professors.

The new site, designed by architect Sir Horace Jones, comprised a Common Room for Professors and 45 studios, each surrounded by a 1 one foot thick layer of concrete to 'deaden the sound'. Each room contained both a grand piano and an upright piano. Additionally, there was an Organ room and a 'Practice' room, in reality a small concert hall which was used for orchestral and choir rehearsals. The 'Practice' room was also the venue for the fortnightly School concerts

Initially, all tuition was on a part-time basis, but full-time courses were introduced by public request in 1920. Departments of Speech, Voice and Acting were added and by 1935 the School had added "and Drama" to its title.

In 1993 the Corporation of London leased a nearby courtyard of buildings that in the 18th century had been the centre of Samuel Whitbread's first brewery, and renovated and converted this to provide the School with its Hall of Residence, Sundial Court. About three minutes' walk from the School, Sundial Court offers self-catering single-room accommodation for 178 students.

In 2001 the Secretary of State, Baroness Blackstone, announced that the Barbican Centre, including Guildhall School, was to be Grade II listed.

In 2005 the School was awarded the Queen's Anniversary Prize for its unrivalled development and outreach programme, Guildhall Connect, and in 2007 it won a further Queen's Anniversary Prize in recognition of the work of the Opera Programme over the last two decades. The School regularly features at the top of the Guardian University Guide music league table, the Complete University Guide arts, music and drama league table, and other rankings, and was awarded Gold in the Teaching Excellence Framework.

The most significant investment in the Guildhall School’s future came to fruition via the £90 million redevelopment of the neighbouring Milton Court site. The building, which opened in autumn 2013, houses three state-of-the-art performance spaces: a concert hall (608 seats), a theatre (223 seats) and a studio theatre (up to 128 seats) in addition to drama teaching and administration spaces.

The School is a member of Conservatoires UK, the European Association of Conservatoires and the Federation of Drama Schools. Guildhall School is also part of Culture Mile, a new home for contemporary culture in the ancient heart of London’s working capital, running from Farringdon through to Moorgate. The City of London Corporation together with the Barbican, Guildhall School of Music & Drama, London Symphony Orchestra and the Museum of London, are bringing the area to life with imaginative collaborations and exciting events.