Guildhall School’s premier music prize was founded and endowed by Sir H. Dixon Kimber in 1915 and since the 1950s it has been open to singers and instrumentalists in alternate years. 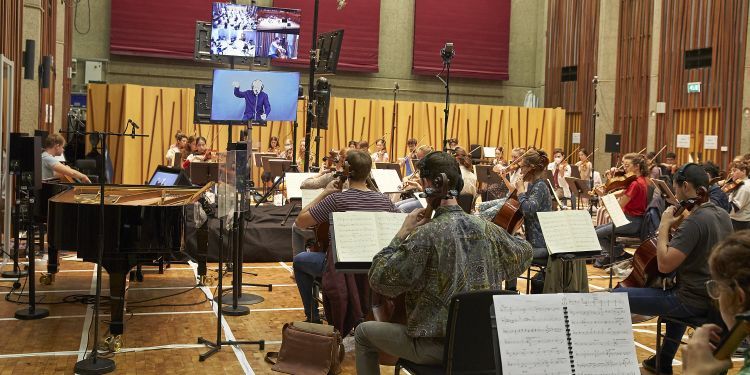 The Guildhall School’s premier music prize was founded and endowed by Sir H. Dixon Kimber in 1915 and since the 1950s it has been open to singers and instrumentalists in alternate years. The final traditionally takes place in May each year in a sold-out Barbican Hall.

In recent years, the Gold Medal has been won by:

Baritone Thomas Mole studied with John Evans on the Opera Course at Guildhall, where he also gained a BMus (Hons) in Vocal Studies.

Thomas’ roles at Guildhall include Gil Il segreto di Susanna, Aeneas Dido and Aeneas, Sprecher Die Zauberflöte, Barone di Trombonok Il Viaggio a Rheims and Hotel Manager Powder Her Face; other roles he studied and performed at Guildhall include Snug A Midsummer Night’s Dream, Pluto Orpheus in the Underworld and he appeared in several chorus ensembles including Così fan Tutte.

On the concert platform, Thomas sang Duruflé’s Requiem with St Mary Magdalene Music Society and later with the East London Chorus before joining Dorking Choral Society for a performance of the Brahms Requiem; he traveled to Dorchester Abbey for performances of the Messiah. Tom appeared as soloist in Haydn’s Creation, Fauré’s Requiem and Handel’s Messiah with orchestras and choral societies across the country.

Thomas’ other successes include the roles of Madhouse Innkeeper/Nick Shadow (c) The Rake’s Progress, Dr Pangloss Candide and Alidoro La Cenerentola all with British Youth Opera. He also made his Opera Holland Park debut in the Young Artist’s performance of Un Ballo in Maschera in the role of Count Horn.

Other recent highlights include the roles of Bartolo and Antonio Le Nozze di Figaro at Goodenough College, and at Piggots Festival he appeared as Frank Hubbard Doctor Atomic and as Angelotti Tosca in concert. He also sang the roles of Mountararat and Private Willis Iolanthe with East Surrey Choral Society.

Future engagements include his debut as Kuligin Kát’a Kabanová at Glyndebourne Festival, where he is a Jerwood Young Artist.

Soohong Park was educated in Jeju, South Korea and then in Detmold, Germany. He completed both his Bachelor and Masters degrees at the Hochschule für Musik, Detmold, where he studied with Dina Ugorskaja, Alfredo Perl and Peter Orth. He won third prize at the Wiesbaden International Piano Competition in 2009 and during his studies in Germany, Soohong won first prize with his trio at the Auryn Chamber Music Competition in both 2015 and 2016.

He completed his Artist Masters at Guildhall School and undertook the Artist Diploma in 2019-20 under the direction of Ronan O’Hora. He was the winner of the Glass Sellers’ Beethoven Piano Prize at Guildhall in 2016 and second prize winner of the Beethoven Piano Society of Europe Intercollegiate Competition in 2017. In 2019, he was finalist at the Isang Yun International Competition in Tongyeong, South Korea and semi-finalist at the seventh Sendai International Music Competition in Japan. He has attended masterclasses with Bernd Götzke, Günter Ludwig, Richard Goode, Jonathan Biss, Ferenc Rados and Murray Perahia.

His studies at Guildhall School were supported by The Sophie Satin Sergei Rachmaninov Award.

Samantha Clarke is an Australian/British soprano studying with Yvonne Kenny in her second year on the Opera Course at Guildhall School as a Baroness de Turckheim Scholar, Help Musicians, Tait Memorial and Countess of Munster Trust Scholar.

Clarke completed an Advanced Postgraduate Diploma and Intensive Masters of Music at the Royal Northern College of Music (RNCM), as a Sir John Fisher Foundation and Independent Opera Scholar, under the tutelage of Mary Plazas.

Clarke is the recipient of numerous awards, including the Leverhulme Royal Northern College of Music Award, the Dame Eva Turner Award and the Michael and Joyce Kennedy Award for the singing of Strauss. She was awarded a 2017 RNCM Gold Medal and the Nora Goodridge Developing Artist Award through the Australian Music Foundation for 2017/18 and 2018/19, and is also privileged to be a Samling Institute scholar.

Joon Yoon made his solo recital debut in Korea at the age of 12 and his concerto debut in the U.S. a year later. He is an avid solo and chamber musician and performs a wide range of repertoire from Bach to Brahms to Carter.

Yoon gained his Bachelor and Master of Music at the Juilliard School and the Yale School of Music with full tuition scholarships. His teachers there included Yong Hi Moon, Robert McDonald, Melvin Chen and Hung-Kuan Chen, and are his greatest musical influences. He is currently studying with Ronan O’Hora on the Artist Diploma course at the Guildhall School, where he is supported by the Eduard and Marianna Loeser Award.

He has won top prizes at competitions such as the Piano Texas Concerto Competition, the Liszt-Garrison Piano Competition and the Fite Family Young Artist Piano Competition, as well as winning awards at the Peabody Preparatory in Baltimore and the Campillos International Piano Competition in Spain. He was the 2017 winner of the Glass Sellers’ Beethoven Piano Prize at the Guildhall School.

Yoon has performed in prestigious venues across Japan, Korea, Spain and the U.S., including Alice Tully Hall, Carnegie Hall, Petit Palau of Palau de la Música, Seoul Arts Center, and Sejong Center for the Performing Arts. He has made concerto appearances with the Peabody Sinfonietta, Fort Worth Symphony Orchestra, and Connecticut Virtuosi Chamber Orchestra. He has been a fellow of prestigious music festivals such as the Music Academy of the West, the Bowdoin International Music Festival’s Kaplan Fellowship program, where he collaborated with Amir Eldan, Kurt Muroki, Ayano Ninoyama, the members of the Ying Quartet, and New York Philharmonic concertmaster Frank Huang. As a chamber musician, he has worked with Peter Wiley of the Guarneri Quartet, Joel Smirnoff of the Juilliard Quartet. Yoon has also worked with Richard Goode, Yoheved Kaplinsky, Jerome Lowenthal, John O’Conor, Matti Raekallio, and Arie Vardi in masterclasses and festivals.

Born in Barcelona, baritone Josep-Ramon Olivé studied at the Escola Superior de Musica de Catalunya, followed by the Guildhall School’s Opera Course. He is currently on the Artist Diploma programme under Professor Rudolf Piernay and is a recipient of the Harry Rolfe Award.

He has performed with the London Handel Orchestra, Les Concert des Nations, Hespérion XXI, Barcelona Symphony Orchestra, Orchestra of the Age of Enlightenment. He has performed all around the world in venues including: Palau de la Música Catalana, Shanghai Grand Theatre, Konzerthaus Vienna, Philharmonie de Paris, and the Barbican Hall. He has collaborated with Jordi Savall, Kazushi Ono, Laurence Cummings and Sigiswald, Kujken and has recorded for Alia-Vox, Columna Música, Phaedra, Discmedi and Musièpoca labels. He is currently a member of the Capaella Reial de Catalunya, conducted by Jordi Savall.

His future plans include The Count in Le nozze di Figaro with Clonter Opera; and Le Jardin des Voix Academy with William Christie and Paul Agnew.

Harpist Oliver Wass (Harp 2016) is in his first year of a Masters degree at the Guildhall School, for which he was awarded a full scholarship to study with Imogen Barford. He graduated from the University of York with a First Class Honours degree, achieving the highest mark ever awarded for a final recital, and winning the Blake Music Prize.

He has performed numerous concertos and has directed the Handel Harp Concerto in the Barbican Hall in 2011. He has also performed concertos at the London Handel Festival, the City of London Festival, with the Oxford Sinfonia, and with the World Chamber Orchestra.

He is a Tillett Trust Young Artist and will make his Wigmore Hall debut in November 2016. He is also a 2016 St John's Smith Square Young Artist, and will be giving recitals throughout the 2016/17 season.

Wass recently won 1st prize in the British Harp Chamber Music Competition with his flute-viola-harp trio, and they have upcoming concerts at St John’s Smith Square, the Two Moors Festival, and for the United Kingdom Harp Association. An experienced soloist, Wass competed in and won music festivals throughout his childhood. He studied with Charlotte Seale at the Junior department of the Guildhall School, where he became the only harpist to have been a prize-winner in the prestigious Lutine competition, and he was Principal Harp in the National Youth Orchestra.

Jennifer Witton (Opera 2015) studied at Bishop Luffa School and Chichester College before completing undergraduate and postgraduate courses at the Guildhall School. She currently studies on the Opera Course at the Guildhall School under the tutelage of Sarah Pring. Jennifer recently won a Miriam Licette award at the 2015 Maggie Teyte Competition. In 2014 she won first prize in the Rosenblatt Recital Prize in the North London music festival and first prize in the Guildhall School Aria Prize, and in 2013 she won the Dvořák society Song Prize at the Emmy Destinn Awards, and the Winchester consort prize at the Hampshire Singing Competition. Jennifer has worked with Opera North, Wexford Festival Opera, Raymond Gubbay ltd, Opera di Peroni, Glyndebourne Festival Opera, Royal Opera and has performed at venues including St Martin-in-the-fields, Royal Albert Hall and the Wigmore Hall. In the 2014-15 season she covered the role of La Musica/Euridice in Monteverdi’s Orfeo for the Royal Opera House.

Marta Fontanals-Simmons (Opera 2015) is from Castle Cary, Somerset and attended St Antony's Leweston School in Sherborne, Dorset. She is on the Guildhall School Artist Diploma programme studying with Marilyn Rees, having completed the postgraduate Vocal Studies programme and the Opera Course. A finalist in the 2014 Kathleen Ferrier Awards, Marta is winner of the Maureen Lehane Vocal Awards 2011, the Odette Sansom Award for English Song at the Guildhall School, Runner-Up in the Thelma King Award, and finalist in the Hampshire Singing Competition. She was awarded the Principal’s Prize in 2014 and is a Jerwood Young Artist for 2015. Marta made her Wigmore Hall recital debut in June 2014 as a Tillett Trust Artist and will be joining the Glyndebourne Festival chorus this year.

Explore our Music offer at Guildhall to find a course or programme at Guildhall for you, from our highly regarded BMus undergraduate programme, a range of postgraduate and doctoral research programmes, to other opportunities including short courses, summer schools and training for under 18s.

At the heart of music training at Guildhall is intensive, one-to-one and small ensemble sessions with Guildhall’s core staff of over 400 practitioner teachers.

Find out more about the audition and interview process for our undergraduate and postgraduate music programmes.