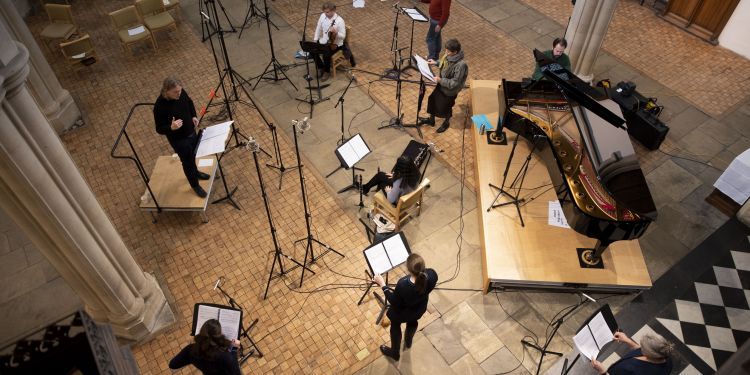 56% of School’s research activity classed as world-leading, including 100% of its research impact

Guildhall School has been rated the top music conservatoire for research in the latest Research Excellence Framework (REF2021), the national assessment of research in UK universities.

Comparison with performance in REF 2014 is imperfect due to the different elements of the application being weighted differently in the 'Overall' result. In 2014, Outputs counted for 65% of the 'Overall' result and Impact 20%, when in 2021 this was adjusted to 60% Outputs and 25% Impact. However, the results show a significant uplift in quality since the last REF exercise in 2014, reflecting the considerable growth and increasing international impact of the School’s research activity. In the School’s overall quality profile, the 4* percentage more than doubled compared with its result in 2014 (21% in 2014, 56% in 2022). The School’s 4*+3* score (where 3* denotes work that is internationally excellent) increased by more than half (from 51% in 2014 to 77% in 2022).

Edited by Andy Lavender and Alex Mermikides, 'Lightwork: Texts on and from Collaborative Multimedia Theatre' is a volume of performance texts and commentaries by members of noted experimental theatre company, 'Lightwork'.

The Price of Curiosity

Richard Baker’s orchestral reimagining of a scene from Alfred Hitchcock’s, The Man Who Knew Too Much. BBC Symphony Orchestra premiere 27 May 2022

For more information about the School's submission process, you can download the School's 2021 Code of Practice.

If you have any enquiries about research at Guildhall School, our team will be happy to help.

Our priorities for the next five years aim to address the precise role research has to play in the performing arts, what kinds of research will be the most appropriate in the near future, and how they will feed into the School’s overall strategy.

Guildhall School of Music & Drama is committed to ensuring the widest possible access to its research, and has adopted an Open Access for Research Policy. Explore our research outputs in our Reseach Repository.

Postdoctoral Research Fellows are an increasingly important part of the research environment of the School: they receive mentoring from established staff, supervise doctoral research, contribute to research-orientated teaching at undergraduate level, and form a vital part of large externally-funded projects hosted at Guildhall.