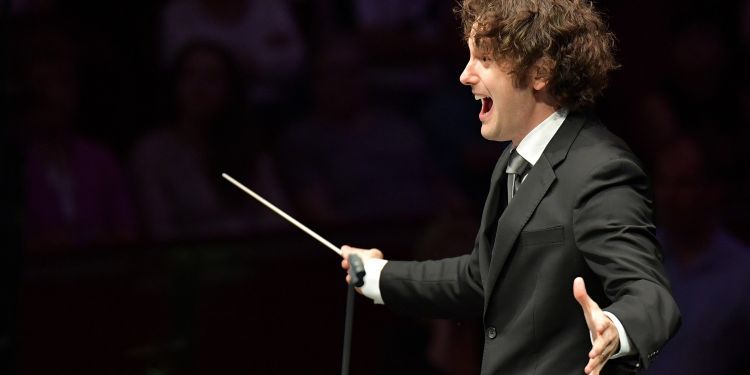 £3 booking fee per online transaction, £4 by phone.
No fee when tickets are booked in person.

Booking fees are per transaction and not per ticket. If your booking contains several events the highest booking fee will apply. The booking fee may be reduced on certain events.

The only symphony written by Olivier Messiaen, Turangalîla-Symphonie, is often described as a tribute to life, love and death.

We are thrilled to welcome back Nicholas Collon – Chief Conductor of the Finnish Radio Symphony and Founder and Principal Conductor of the Aurora Orchestra – to conduct the Guildhall Symphony Orchestra in this performance, which offers the opportunity to hear the Ondes Martenot played by Cynthia Millar, who has been described by The Observer as the “unchallenged sovereign" of the instrument. Guildhall pianist William Bracken features as piano soloist.

Location
The Barbican Hall is located within the main Barbican building. Head to Level G and follow the signs to find your seating level.

Public transport
The Barbican is widely accessible by bus, tube, train and by foot or bicycle. Plan your journey and find more route information in ‘Your Visit’.

We welcome back Roberto González-Monjas to conduct Mahler’s Symphony No 1 and music from Humperdinck’s much-loved opera Hansel and Gretel.

Try a bite-size, informal concert, with friendly introductions to guide you through the concert from our presenter Rachel Leach and witness the London Symphony Orchestra.

The Messengers ~ Impossibilities: Moments In Time

Sharing the stage for the first time since 2016, two of the Guildhall School’s crucial and creative ensembles perform a night of mesmerising and provocative music in Milton Court Theatre.