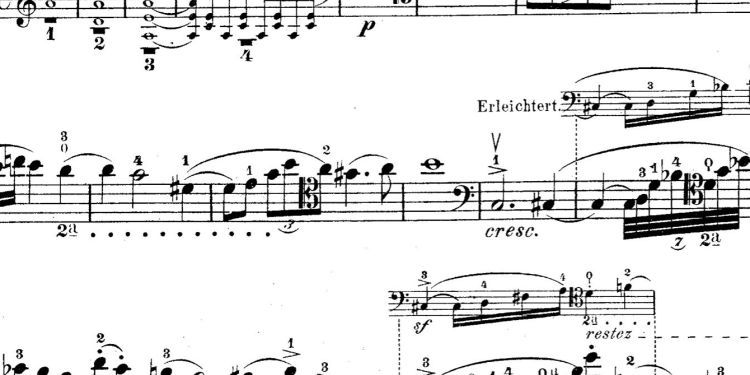 It is now well-established in the historical performance community that music written before 1800 was meant to be treated flexibly in performance, with plenty of scope for improvisation, as well as more structured but unnotated traditions. 19th-century musicians, meanwhile, are in the odd position of being credited with (or blamed for) the concept of work fidelity that privileges the written notation over both individual creativity and oral tradition, and simultaneously condemned for producing “bad editions” that violate this very concept.

The Schumann Cello Concerto, op. 129, written at the exact midpoint of the century, provides a case study of this gradual shift in both thinking and practice, revealing a reverent yet surprisingly flexible treatment of musical text. A handwritten copy of Schumann’s score belonging to Ludwig Ebert (1834-1908), who gave the concerto’s premiere in 1860, shows dramatic changes to the cello part, the orchestration, and arguably even the structure of the piece. This presentation examines some of the patterns that knit together Ebert’s version with other substantially altered versions from the private collections of later cellists, as well as the more modestly altered versions that were published as performing editions when the initial copyright expired in the 1880s. A better understanding of these patterns might then win some additional creative space for those who wish to engage with this beloved centrepiece of the cello repertoire.

Dr. Kate Bennett Wadsworth is a cellist and gambist devoted to historical performance of all periods, with a special research interest in 19th-century performing practice. In collaboration with Clive Brown and Neal Peres da Costa, she has prepared annotated editions of the Brahms Cello Sonatas and co-authored Performance Practices in Johannes Brahms’ Chamber Music, published by Bärenreiter in 2015. Her recording of the Brahms Cello Sonatas with historical pianist Yi-heng Yang, released on the Deux-Elles label in 2018, has been praised for its “narrative quality” (Gramophone) and its “ardor and depth” (Early Music America). Kate studied modern cello with Laurence Lesser at the New England Conservatory, baroque cello with Jaap ter Linden at the Royal Dutch Conservatory in The Hague, and 19th-century performance practice with Clive Brown at the University of Leeds, after completing a bachelor’s degree in Scandinavian studies at Harvard University. She is currently a Leverhulme Early Career Research Fellow at Guildhall School of Music and Drama.

Guildhall School's Music Therapy Department has been providing community outreach music therapy to local schools and services since 2013. This presentation will discuss the first part of a project to design and implement an evaluation protocol.

This presentation will explore Matthew's ongoing research into musical narrativity in a variety of projects, including his 2018 collaboration with Simon Armitage and Hansel and Gretel: A Nightmare in Eight Scenes for narrator and ensemble.

ResearchWorks: Towards the Evolution of Music

Music fills our lives. How we have created, performed and listened to music throughout history has defined what our species is and how we understand who we are. Yet music is an overlooked part of our origin story. This talk, based on Michael's bestselling popular book, The Musical Human, explores the vibrant relationship between music and the human species.