This four-day in-person course will give you a thorough grounding in the physical technique of conducting and will see you conduct a variety of repertoire. 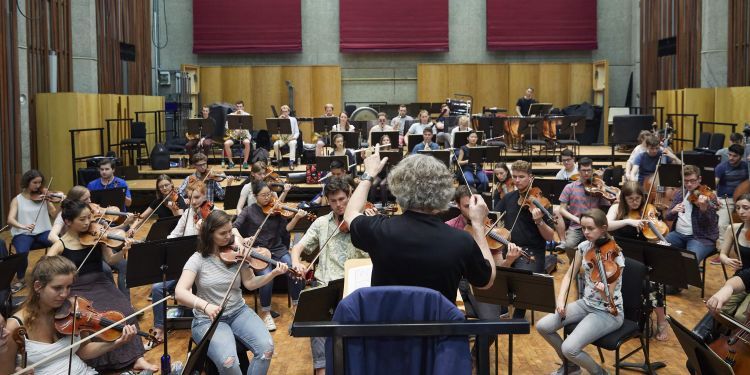 This four-day in-person course will give you a thorough grounding in the physical technique of conducting and will see you conduct a variety of repertoire.

Whilst the focus of the course will be on the practical application of conducting technique, you will also receive training in ensemble direction, including score preparation, rehearsal technique and effective verbal communication.

Music educators, professional musicians, and music students with or without conducting experience.

Music educators may be, for example, classroom teachers, peripatetic instrumental / singing teachers, or music service teachers. Professional musicians may already conduct ensembles or might be interested in exploring conducting as a future part of their career.

You will leave the course with the ability to direct ensembles confidently. Participants will develop a thorough understanding of the physical, technical skills of conducting. In addition, participants will be able to lead rehearsals efficiently and effectively by exploring best practices in - for example -  score preparation, rehearsal planning, and verbal communication.

You can expect to conduct a variety of repertoire, initially with two pianists and later with a chamber ensemble. These sessions will be videoed, and copies of the video will be distributed to all participants. Following the course, participants are encouraged to record themselves conducting their own ensemble, in order to receive post-course feedback from the tutor.

You do not need to own a conducting baton to attend the course.

The course is taught by Scott Wilson.

London-based Australian conductor Scott Wilson is Head of Orchestra Learning for the Orchestra of the Americas' OAcademy, Director of the OAcademy's Conducting Fellowship, and is a conducting teacher within the Youth and Adult Learning Department at Guildhall School of Music & Drama. In addition to teaching students world-wide, through his online studio, he has taught at the Royal College of Music, Trinity College of Music Junior Department, and the Aldeburgh Young Musicians Programme. Also he has worked as an Associate Conductor of the National Youth Orchestra of Great Britain.

His work as an educator is underpinned by the manual on conducting technique which he has written over the past decade. In addition, he has written a book on audience engagement and development for orchestras - You ain’t heard nothin’ yet: The Potential of Orchestral Music. During the pandemic this was developed into the podcast A Thousand Pictures.

Previously he was Zander Fellow with the Boston Philharmonic Orchestra, Artist in Residence at Guildhall School of Music and Drama, and Conducting Fellow at the Guildhall School. His musicianship is founded on the pedagogical traditions of Ilya Musin and Nadia Boulanger, which he received under the mentorship of his principal teachers Sian Edwards and Norman Beedie. He studied with Kurt Masur in Sweden, Gianluigi Gelmetti in Italy, Johannes Fritzsch in Australia, and Ed Spanjaard in Hungary. Recently he made his debut at Opera Holland Park, conducting Mark Adamo’s Little Women.

In his former career as a percussionist he specialised in contemporary solo and chamber repertoire. He worked with the Australian World Orchestra, Birmingham Contemporary Music Group, Philharmonia Orchestra, Royal Shakespeare Company, and at the Royal National Theatre, recorded chamber music for the BBC, and performed at contemporary music festivals throughout Europe.